Can We Sustain The Magic of the Skagit River and It’s Salmon? 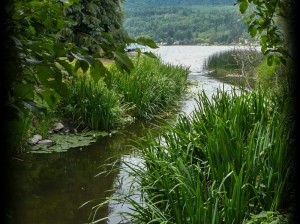 The Skagit River is home to five species of salmon and three species of trout, and produces the largest amount of these fish of all of the rivers of Puget Sound. This is largely due to its size (third largest river on the West Coast), high quality headwater areas in the Cascade Mountains, and the high diversity of habitat that juvenile fish use for rearing in its middle and lower reaches.

The Skagit produces about 50% of all the Chinook salmon in Puget Sound each year. Unfortunately, this king of the salmon is greatly reduced from historical abundance. Scientists have strong evidence that spawning conditions are abundant and of high quality in rivers and streams of the upper watershed but that the habitat in the floodplains and estuary where they grow up (or rear) limits their survival. This makes common sense because if the baby fish don’t have places to hide, feed, and grow before being swept out to Skagit Bay at a small size they are much more likely to perish.

This rearing habitat for young fish in the mainstem valley bottoms and the estuary where freshwater mixes with saltwater has been significantly reduced since settlement of Skagit County in the last century. Our society has diked, dredged, ditched, and diverted the river and its tributaries to benefit other human values such as urban development and agriculture. For example, the area available for estuary rearing fish has been reduced from 28,375 acres historically to 7,700 acres today, which is a 73% loss of this most important type of habitat.

In 2005, salmon recovery planners developed a goal to try to increase estuary rearing capacity by 60% to provide enough habitat for Chinook salmon to persist into the future and not go extinct. Depending on the location and quality of restoration sites, one way to meet this goal would be to return about 2700 acres (less than 10% of historic estuary habitat) to flooded wetlands by setting back dikes. And this is exactly what state, local, and tribal governments have been doing. With the completion of Washington Department of Fish and Wildlife’s latest project at their Fir Island Snow Goose Preserve in 2015/2016, 667 acres of estuary habitat will have been restored since 2005, which is equal to about 25% progress towards meeting this goal in 10 years!

About 140 other restoration projects have been completed in the Valley since 1998 and have made similarly important strides for salmon and trout habitat. Here are some notable examples:

While different organizations and landowners are doing what they can to restore habitat that was damaged before we knew how impactful it was to fisheries resources, the true magic of the Skagit River is that it is very much still in good shape habitat-wise. Given that, most of the goals outlined in the Skagit River Chinook Salmon Recovery Plan, and forefront in the minds of Skagit County and Washington State citizens, are just to try to preserve and protect the river just as it is for future generations. Who wouldn’t want the opportunity to pass along this wonderful treasure so others could benefit from it as we have?

If you want to do your part to preserve and/or restore the magic of the Skagit and Samish Rivers, you can find much more information by contacting the Skagit Watershed Council (www.skagitwatershed.org) or any of its 34 members to find fun ways to participate, whether you are a school-aged child, a streamside landowner, or just a member of our community who wants to be a part of ensuring we leave this place better than we found it!