More to the Forest than Just the Trees

Mark Hitchcock’s life in the woods 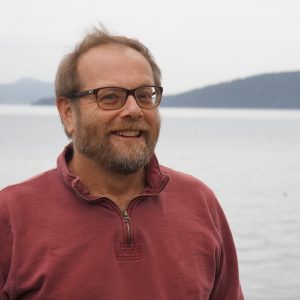 When Mark Hitchcock reflects on Skagit Valley’s unique character, one particular memory comes to mind. He was serving his first term on the board of the Skagit Conservation District when baseball season came around. He and his wife Alison joined a team of folks from the District, the Natural Resource Conservation Service, and the Farm Service Agency.  Fittingly, their uniforms bore the white and black pattern of a Holstein cow. They named themselves “the Lagoons,” in an effort to draw attention to an important issue at the time: managing dairy waste in manure lagoons. Unfortunately, this resulted in an unexpected nickname from opposing teams: the L.A. Goons.

Despite their winning outfits, the Lagoons managed to lose every single game that season. “In the final game, we played the only other team that had not won a game yet,” Hitchcock recalls with a laugh. “They did manage to beat us.” Even though they had a rough season, Hitchcock remembers it fondly. Reclined in a rocking chair in his home on Samish Island, Hitchcock wears an air of affability with a glint of humor in his eyes above a red beard. “We had a lot of fun playing baseball and staying tight to the work.”

In some ways, Hitchcock’s experience playing baseball reflects the best of Skagit Valley: people coming together to enjoy this place, work hard for what’s important to them, and have fun doing it.

For Hitchcock, that work has been in the woods as a forester and timber consultant. Raised in the town of Forks, he was surrounded by vast temperate rainforest and a thriving timber industry. “I essentially grew up in the woods,” he says. “That’s where my comfort zone is. I like spending time alone in the woods, which is a good thing because that’s mostly what I did for my work.”

As a teenager, he worked in the Youth Conservation Corps building trails, an experience that deepened his connection with the forest. He learned about the plants and animals and the natural systems that bind them together. “That program let me see other opportunities for working outdoors – that there was more to forestry than just timber management, and more to the forest than just the trees.”

Eventually, Hitchcock earned a bachelor’s degree in forestry from the University of Washington and a master’s degree from the Yale School of Forestry and Environmental Studies. He moved to Skagit County in 1987 to start a consulting business helping private timber companies and public agencies manage their timberlands. A distant childhood memory helped draw him back to the northwest corner of the state: When visiting his grandfather in Lynden, he remembers dropping down Conway Hill and being awed by the colorful carpet of tulips covering the valley.

Since moving here, his years in the forest have instilled a deep appreciation for the abundance of natural resources and how much they’ve provided for communities here and around the world. “I don’t know how many times we rebuilt San Francisco from here, but we did,” he says, referring to the city’s reliance on Northwest timber to recover from historic earthquakes and fires.

Over the course of his thirty-year career, he saw the timber industry experience tectonic change. When he first came to the Skagit, the Society of American Foresters had 110 members in northwest Washington. Now they are down to 48. That shrinkage was caused by a complex mix of regulations, changing markets, and mechanization, he says. “It’s gone from thinking this timber would last forever to realizing that wasn’t going to be true without regulating some flows,” he says. “And then over time we’ve started paying more and more attention to all of the other things we get out of forests and the rest of our natural resources… How do we live in this world and still save the things that we think are important?”

Though he chose a career that became mired in controversy, Hitchcock has kept his sense of humor. When he turned 50, his wife dared him to change the name of his consulting business to Fairweather Forestry. “In forestry circles, it’s considered derogatory to call somebody a fairweather forester,” he explains with a smile. “I decided I would win that bet.”

Hitchcock has served on the boards of natural resource organizations like the Skagit Conservation District and the Skagit Land Trust. Now retired, he volunteers for the Department of Natural Resources and the Samish Indian Nation helping to manage Cypress Island, which he can see from his waterfront home.

Looking out at Padilla Bay from his living room, Hitchcock points out an area where he regularly sees a pair of marbled murrelets, a threatened seabird that flies inland to nest in big, old trees. The birds are also the driving force behind protective forest management regulations. “It’s nice to see that they are nearby,” he says.

The unique combination of environments in the Skagit is one reason why Hitchcock has stayed here for all these years. “Skagit County is special because of the juxtaposition of all of its natural resources from forest to salt water and the islands,” he says. “And then the interface with our use of the land.”

Too often, Hitchcock says, land use in Skagit Valley is taken for granted, especially by newcomers. “I find that hard to swallow because that’s what makes this place desirable for them,” he says. “The fact that they don’t appreciate the natural resource industries we have and how they contribute to the overall environment aesthetically and economically is disheartening.” He points to the birds that stop to rest from their long migration in nearby farm fields. “I love seeing all the swans and the snow geese in the wintertime,” he says. “It makes me realize we’re still part of the natural environment and we do live in a very glorious place.”

With tulip season coming soon, Hitchcock seems grateful to have spent all these years in the special place he remembers as a kid. “As soon as I’m dropping down Conway Hill and I’m looking at the valley, I see home,” he says. “I see the whole valley as home.”