The Beauty of People and Place 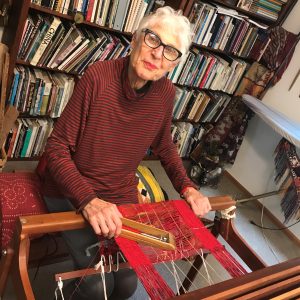 Anita at her Loom

Anita Luvera Mayer, the daughter of Italian and Croatian immigrants, has spent most of her life in Anacortes. Her mother’s family came from Splitska on the island of Brač and her father from Reggio, Italy when he was just 12 by way of Alberta, Canada. Her father, Paul Luvera, owned a grocery store in Anacortes from 1922 until 1957 which also served the fishing industry during each summer.

In the first half of the twentieth century, fishing and lumber mills were the foundation industries in Anacortes. During the height of the season, Anita recalls, “Several hundred boats coming into Anacortes to tie up for the weekend at various marinas. They were six to ten boats deep.” The boats would head out Saturday afternoon and then fish from sun-up Sunday to sundown on Friday, with Friday nights spent in the town of Anacortes. The cooks from each boat would come into her father’s store and order about 6 or 7 boxes of food for the week. On Saturdays, Anita’s family and a number of employee that would deliver the supplies. “We’d take a Deep breath on Sunday, on Monday we’d start all over again. Because the big buyer boats [boats that went out and bought the fish from the purse seiners] were out of the fishing grounds and they came in every night, my job was to stay up till midnight during the week and the canneries would call in the orders, that the buyer had gone to one of the boats and they needed another four loaves of bread, whatever… So I’de take all the orders.” As you can imagine, the local industries in Anacortes and the County were very different than they are today. “There were at least six mills and five or six canneries. Huge fishing fleet went out from here so it was a really extraordinary time. It was late 30s to the 40s. If there was a good run of the salmon, everybody benefited; if not, it would be a tough winter. But that’s what made the town go.” Anita recalls describing the boom in Anacortes. 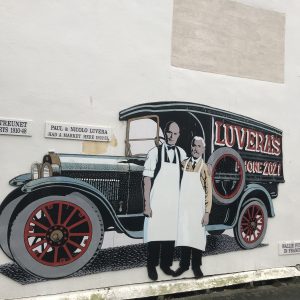 Eventually, Anita went off to college at the University of Washington, worked in California, and returned to Anacortes when she married her husband Jack. Theye raised their three children in Anacortes. As a wedding gift, Anita’s mother-in-law gifted her a loom and taught her how to use it. The loom changed Anita’s life. “I was soon up at naptime and late at night with learning about weaving.” Anita sold some items to friends, eventually in 10 or 12 shops; with each item she sold on consignment she would buy more yarn. Anita has turned weaving and textiles into a second career, going back to school for seven years at age 65. She has traveled the world to experience different cultures’ textiles, but always returns to Skagit Valley. “When I reach Conway hill coming home from Seattle, it’s a great sigh of relief, I am back in my County.” 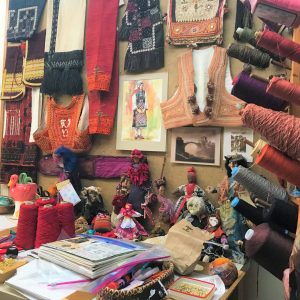 Anita’s workspace with inspiration she has collected from around the globe.

The people of Skagit and the beauty of Skagit is what has kept Anita here for all these years. She admires how engaged old timers and new comers are in preserving Skagit as special place to live.  “I’m proud of this community.” Even with population growth and the development that comes along with an increase in population, Anita admires that little towns in Skagit like Anacortes, La Conner, and Edison who have kept their small-town charm. “They are not rubberstamp communities. I’ve noticed traveling, in this country in particular, you can drive for miles, town after town and not know what town you are in because there’s nothing that says ‘Anacortes Market’ or ‘Mt. Vernon Co-op’; they’re all national companies and industries, you can be anywhere in the world and it doesn’t look any different. It is so important that communities in Skagit County have strived to retain individual identities from the Marine Supply in Anacortes to the Gaches Mansion in La Conner; and it is essential that we support these efforts and the locally owned businesses.”

When asked what her favorite thing about the Skagit Valley is Anita’s list goes on and on. Mountains, beaches, mud flats, unique towns, no-nonsense people, tulips, fog… “It’s a good place to live, wonderful place to raise children.”