The Lifeblood of this Valley

After decades of farming the Skagit, Mike Youngquist values the community and the river that feeds it 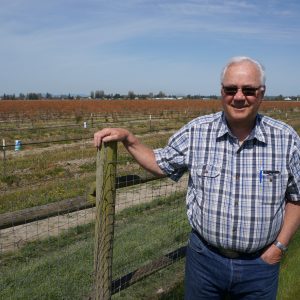 Mike Youngquist’s agricultural roots in Skagit Valley run about as deep as they get. In 1880, his great-grandfather John Jungquist immigrated from Sweden and homesteaded in 1886 a 40-acre parcel on what would become Jungquist Road. Mike was born in 1943 and raised on that same land where his father (Don) and grandfather (Emil) ran a dairy farm.  He worked on the farm through high school, studied agriculture in college, worked summers in the Skagit pea fields, and eventually returned to carry on the legacy of working the family land in 1970. Today, he lives in his grandfather’s house, no longer grows crops, but still packs and markets strawberries and raspberries with his wife (Jeanne) as Mike and Jean’s Berry Farm.

That deep family history shapes how Youngquist manages his farm. “It’s our mission to leave the land in better shape than when we got it – for every generation,” he says, sitting at his dining room table in a plaid shirt. His mission also extends beyond his farm to working with agencies, universities, and other organizations to support the agricultural community and help it adapt to the constant change he’s seen throughout his career. “When I went to work out of college, there were 12 frozen food processors in this valley,” he says. “There are none now. That’s been a tremendous change.”

Much of that change has been caused by the global economy, Youngquist says. “Right now, it’s cheaper to ship a container of food from China to the east coast of the United States then for us to ship from here to the east coast,” he says with a loud chuckle. “So, in the last 40 to 50 years, all of our crops are in a world economy.” That means intense competition for Skagit farmers facing higher land and labor costs.

Technology has also transformed Skagit agriculture. “Every time there’s a bigger piece of equipment, it’s just less people,” says Youngquist. “You can’t make it by working hard anymore. You’ve got to be a marketer, you’ve got to be a people manager, and you’ve got to be knowledgeable about how to grow. And it’s still tough to survive. A lot of very good farmers have gone out of business.”

Add development, water issues, and climate change to these challenges and it becomes clear that being a farmer in the Skagit takes resilience. “Whether you believe in global warming or not, we see it in the crops,” he says. The difficulties can be particularly daunting for new farmers. “People used to want to buy their own land and farm their own land. You can’t do it anymore.”

Facing these hardships, Youngquist says Skagit farmers have learned to rely on each other. “We have to rotate our crops, so farmers now work together,” he says. “A potato grower may not be a good seed grower and so there’s a lot of trading of land. Instead of competition there’s cooperation, which is a lot different than it was 30 years ago and a lot different than other parts of the country.”

Youngquist also supports farmers by lending his expertise to research groups at Oregon State University and Washington State University, as well as the Northwest Growers Association, and the Northwest Agriculture Research Foundation. But he is most proud of co-founding with Bob Hulbert and Bob Mickolson, a leadership program called the Washington Agriculture and Forestry Education Foundation in 1977, which has now trained more than 1,000 natural resource professionals to become leaders in their industries. The program is also building a broader community of support similar to that in Skagit Valley. “Most people don’t realize that to survive here you’ve got to cooperate with one another and help one another,” says Youngquist. “You just can’t survive being an island.”

For Youngquist, that philosophy extends beyond the farming community to environmentalists, tribes, fishers, and loggers, and the more contentious land and water use issues in the valley. “We wouldn’t survive the way we are if we didn’t have people with deep roots in this valley who understood what it takes to preserve farmland,” he says. “Drainage and diking and having available water are religions for the productivity of this valley staying the same, because if we can’t stay productive we can’t economically survive in competition with the rest of the world,” he says. “If we’re harming the salmon, that’s one issue – we can’t do that… We all have to work together to make it work.”

Despite these challenges, Youngquist seems particularly resilient after his many years on the farm. “I love the struggle,” he says. “You know, you’ve got to have a mentality to handle the struggle. And I’m extremely pleased by what the valley produces. We can do well here for many generations.”

Outside the farmhouse, the sun shines down on the fields on one of the first clear and sunny spring days of the year. “Everybody’s smiling with the first sunshine,” he says. “If I stop and look at Mount Baker like right out this window, that’s worth the day. We’ve got such natural beauty here that we forget about it.” He feels a special connection to the river. “The unique thing about this valley is the river. It’s the watershed of the river, the good soil, and the diking and drainage that can make the land productive and keep the river clean and free flowing, and growing salmon on it. I want to say it’s the lifeblood of this valley.”

After five generations of Youngquist family farming, Mike hopes there will be five more generations of the Youngquist/Jungquist and Wesen/Wersen families farming in the Valley. The result of two brothers marrying two sisters that homesteaded here in the late 1800’s. At age 74 he seems ready for another year of it. “I like the seasons,” he says. “Every January is the start of a new year. It’s like a start of a life. You’ve made your mistakes in the past year and you’ve got optimism that this next year is going to be better. That’s what you grow up with in this valley. You can admit your mistakes and correct them, and you can start over. That’s what I love about farming in this valley.”