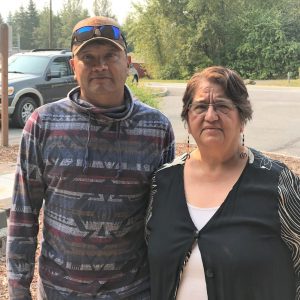 When Scott Schuyler was a kid, he learned to love summers in the Skagit the hard way. Early on, he learned that to be successful at fishing you had to be committed, so on the night before opening day of every salmon fishing season, he would take his boat to the river to try to secure his place at the front of the line. The hope was to be the first boat down the river in the morning to get the first pick of the choicest fishing spots. As night fell, he would curl up in his boat with a tarp for a blanket and try in vain to get some sleep, his head full of visions of flashing silver in the green waters of the Skagit River.

“You would spend the night waiting in your cold boat trying to sleep, but you never slept,” recalls Schuyler, who is now a tribal elder. “It wasn’t so bad in the summer even though it was cold. But in the winter, it was miserable because it would usually rain.” He laughs. “So, I love fishing in the summer.”

Over the years, Schuyler has seen Skagit salmon runs decline, and that has fueled a passion for his work as the Natural Resources Policy Representative for the Upper Skagit Indian Tribe. “We inherited the salmon from our ancestors and we owe an obligation to protect those resources for our children and our children’s children,” says Schuyler, whose 96-year-old grandmother is the oldest member of the tribe. “It’s important that we leave the resource in a better place than when we received it from our ancestors.”

The stakes for the Upper Skagit Tribe are especially high because salmon – a dietary and economic necessity – are also a central part of their culture, and have been for millennia. A recent archaeological dig of an ancestral village site above the town of Hamilton found artifacts for cedar fishing nets like a doughnut-shaped cobble estimated to be roughly 2,300 years old. Every year, the tribe performs the age-old salmon ceremony where they “feed the river” by returning plates of cooked salmon to the water to bless the river and their fishers to have a safe and prosperous year. Keeping a healthy Skagit watershed to continue supporting all five salmon species in the in the face of today’s environmental challenges is essential for the tribe. As Executive Director of Economic Development and Treaty Entitlement, Doreen Maloney says, “The investment for Indian people is generational because we have nowhere to go. Where else can we go?”

“We belong here,” says Schuyler. “I don’t know how else to say it.”

The Tribe’s history in the Skagit spans geologic time: Evidence of human settlement goes back 8,500 years. Ancestors lived in ten villages spread throughout the Skagit and Sauk River Valleys. At the large site above Hamilton, archaeologists have found some 60,000 artifacts that are now stored in the Burke Museum of Natural History and Culture in Seattle.

The oral tradition of storytelling also keeps the Tribe’s history alive today, says Marilyn Scott, Vice Tribal Chair, and those stories are tied to specific places around Skagit Valley. “It’s just so special when you hear some of the stories that are passed down from generation to generation” she says. “You can bring your family out to a creek and go fishing and have that experience that is shared as part of a story. That’s part of the tradition.”

Scott also teaches traditional spiritual ways of the tribe that are linked to natural resources and sacred places. “[Those traditions have] now been shared with our younger generation,” says Scott. “They were almost lost because our people didn’t know that they could use natural plants in their everyday life, but a lot of that is coming back now.” Keeping the traditional lifestyle of fishing, hunting, and gathering alive and well is essential to improving tribal health as well, says Scott.

Over the years, the Upper Skagit Tribe has faced many hardships. A few decades ago, the tribe was down to 350 members. “Many tribal members had to go to seek sources of income elsewhere because it was basically illegal for us to fish,” says Schuyler. “My grandmother was part of that era when people were forced to go out and assimilate.” With the Boldt court decision in the 1970s, which affirmed treaty fishing rights for tribes, members started coming home. More recent economic development spurred by the Skagit Casino Resort, has helped improve quality of life as well. Today, there are roughly 1,300 members of the tribe.

With culture, health, and nature bound together, new threats to salmon cause concern. Climate change is causing glaciers in the North Cascades to diminish, which threatens salmon runs dependent on cold water. Schuyler points to the nearby Muckleshoot Tribe whose sockeye fishery has been closed since 2006 due to population declines. In 2014 and 2015, warm temperatures in the Cedar River killed many fish before they could spawn, harming future runs. “If this warming trend continues, who is to say where we are going to be in 15 years without that cold water?” Schuyler asks. “We may be like our Muckleshoot cousins and learning to live without salmon. It goes back to the quality of life that we expect for our future generations. What are they going to have if we can’t reverse or stop or at least to try to mitigate these effects?… What can we do to change what’s going on?”

Facing these questions, the tribe has turned toward the Skagit community. “We realized we need to be a part of the broader picture with all of the community here because it takes all of us to maintain this quality of life,” says Schuyler. “We have to cooperate. But people do have to accept that the tribe is going to continue to be the hunter-gatherers and the fishermen, and we also advocate for that resource. We look for the pathway together where the community around us can continue to grow while preserving the quality of life and the natural resources.”

Scott agrees. “We do have so many resources in this valley, but if we are not working together – the agricultural, the tribal, and citizens in general – we are all going to be impacted,” she says.

Elk is another important resource for the tribe, one that causes controversy when private property is damaged by the herd. “I hear people complaining about the elk or wildlife in general but they have the wrong perspective,” says Schuyler. “I’m thankful that there’s wildlife here that is a product of a healthy environment – the fact that there is salmon here right now with elk, deer, and bear. People seem to forget that we’re also encroaching on their land. As native people we used to share this land with the wildlife, with the salmon. And that’s not the mentality anymore.”

Schuyler hopes to pass that wisdom on to his daughter, Janelle, who will turn 18 this year. He hopes she will enjoy the fishing life as much as he has.

“I’ve been fishing since I was a kid and I hope to continue fishing until the end,” Schuyler says. “And I hope that the salmon will be there.”